I first started working on Wizard’s WARdrobe as my class project for a game-building class I was teaching at a local school. I spent a couple hours each week with a few different age groups, and guided them through the rudimentary steps of game creation. I started working on Wizard’s WARdrobe during one such course as an example to the students. To learn more about this course and to download the class handout check out the link here.

Although I can’t remember whether the inception of Wizard’s WARdrobe was in fact the name itself, or the idea of a fast-paced, wizard-building & battling game, they were both pretty much simultaneous. This including me thinking to myself, “Wizard’s WARdrobe… that name is too good, and such an obvious game, someone must’ve done it already.” To my pleasant surprise, other than a reading group for kids and an online costume store, Wizard’s WARdrobe was, in fact, free for gaming! 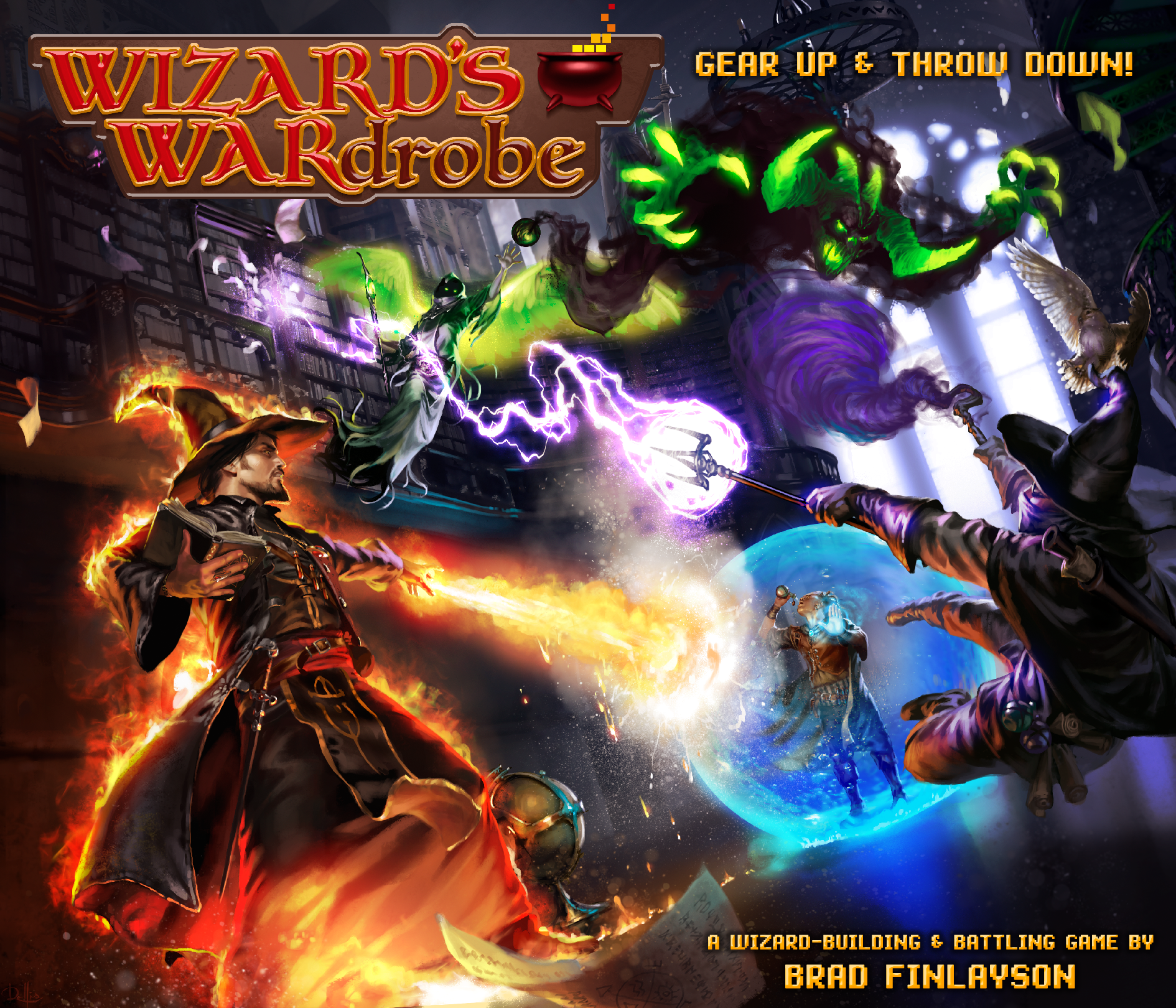 When I went to GenCon 2010 with friend and co-designer Justin French, deck building games were the big thing, so we started some of our own. We found that we quickly got bored with them, and wanted to do more with the deck we had built, other than just score points with it.

Justin & Brad at GenCon 2010 hanging out with a Beholder. No big deal.

So we ended up fleshing out about 4 or 5 deck-building & battling games, of which some we’ll probably release in the future. These were games where everyone started with the same basic deck, but then recruited more options to shuffle into their deck and battle with later on. The combat systems varied between lane-based, forced-turn combat, to more free-form, attacking and blocking like Magic: the Gathering.
However, on top of that, I always felt gipped that I didn’t get to use the cards I had selected but didn’t draw before the end of the game. This was accentuated if my opponent did. That inspired me to shift into more of a direct and immediate engine-drafting & building game, removing the deck altogether. I wanted to pick up some boots, pick up a scroll, and use the boot to cast the spell on the scroll right away!
After the main mechanic idea, the game has been the epitome of a top-down design. Myself and other team members brainstormed typical and innovative wizard & magic spells & items, and figured out how the effects should work, theme-first. Then it was just a matter of tweaking the individual effects based on their action cost, effect values, and whether that effect can be buffed by other effects or not.
To give you the lowdown, Wizard’s WARdrobe is a wildly strategic, wizard-building & battling game. You are an apprentice wizard who has busted into the Grand Wizard’s epic WARdrobe to battle other wizards, free-for-all or in teams, for magical loot!
It is fast-paced (you can start slinging right off the bat), yet highly strategic (with dozens of spells and 8 WARdrobe piles to choose items from, there are many styles of play). You start with 99 Hit Points, two learned spells, and a wizard inventory playmat with 8 color & number-coded body locations for items. During your turn you allocate 3 actions to cast spells, use items, and grab items from the 8 face-up WARdrobe piles, and put them in their appropriate slot on your wizard. Once you’re Geared Up, Throw Down! The last wizard standing wins!
Now, on to the first game. When I make initial prototypes, I usually don’t put much time into it. I use misshaped cards, chicken scratch, etc. The reason for this is that I find most games break right away, and/or I can tell whether it has potential to be fun and interesting quite quickly. I have many games that never got by this stage, and I put very little into them, so that’s fine, no big loss.
So, when I sat down with Justin to play the first game of Wizard’s WARdrobe I was expecting it to break and/or not be fun. However, much to our delight, the very first game was a blast! How could this be? That we completed a full game on the first run, and it was fun all the way through? I knew I was on to something, and the game has been massively refined since then thanks to hundreds of private and public playtesters!

I remember that the 1 learned spell I started with (now you start with 2) was Bubble, a Water spell that stops the first effect that affects you, and then pops. I started out by grabbing the Witch’s Cauldron, an item that allows you to pour potions into it, rather than using them right away. You can then, for 1 action, drink your brew for 1 action and reap the benefits of everything you attached to the cauldron. I began hoarding as many power ups as I could, while using my last action each turn to hide behind Bubble.
Justin had multiple, powerful attack spells that cost 2 or 3 actions each. However, without any extra actions from boots or familiars, he was unable to pop my bubble, and then attack a second time to deal damage. He quickly rummaged through the WARdrobe piles looking for an answer: reading scrolls, drinking whatever potions I had left, testing wands, and tossing them aside. All the while grabbing relevant buffs to his spells, so when he did break through, it would hurt.

I continued to grab potions and pour them into my cauldron, cast bubble, repeat. I didn’t have many great items to buff my spells, or protect me from Justin’s attacks, but my brew was quickly getting out of control. We both knew it was only a matter of time before the standoff broke.

Eventually Justin came across a Minor Healing spell. This spell heals you or another player for a small amount of HP, and costs only 1 action. Justin used this to pop my bubble and start slinging POWERFUL spells at me. And they hurt!

It was on! There was no more time to gather ingredients, I had to put my magic medicine to the test! At this point I had at least the following potions mixed into my cauldron, if not more: 2 Healing potions (which I needed since I was getting smashed), a Strength potion (to buff my attacks since I didn’t have much in the way of item buffs), a Speed potion (to gain more actions to do more things), an Intelligence potion (which gave me another learned spell to add to my repertoire), and an Ethereal potion (which allowed me to get around Justin’s fully suited up wizard by skipping the hit roll, where I could either hit an item or deal damage, and deal direct, guaranteed damage).

At this point, the game didn’t last many more rounds. We threw down, and dealt a lot of damage, items were destroyed, but in the end, my witch’s brew with Bubble back up was just too much for Justin, and I was able to finish him off in a blaze of potion-fueled fury!So that was Wizard’s WARdrobe from the original idea, to the first duel. Check the next article for inside info on how we took an already fun game and tweaked it immensely to get the Wizard’s WARdrobe you see today! I’ll talk about some core mechanics and game flow that had to be changed, why, and how it turned out.Until next time, Gear Up & Throw Down!