I have weekly game nights at my place, and there is usually one other game night somewhere else another day of the week as well. At my game nights we change between BYOG random tabletop games, and an RPG night where players involved in a campaign show up and we play that exclusively.

Currently I am running a Super Hero RPG using the TSR Marvel FASERIP system in an setting of my own creation. This game is an interesting experiment as there are currently 11 players with characters from different factions in a world where people around New York are awakening super powers that fade after a certain amount of time. I envisioned something like the TV series Heroes in a sandbox world where the players, solo or in various organizations, have their own agendas. You can learn more about this Awakening Campaign here http://bradfinlayson.com/tabletop-games/awakening-campaign/

On the random game nights some of the games we have been playing are:

Heroscape is a fully 3D tactical miniatures game released by Hasbro in 2004, but discontinued in 2010. It has been revived and rethemed as their Magic: the Gathering battle board game, Arena of the Planeswalkers.

Although Heroscape was discontinued, the fan support is still strong with updated house rules and community created (and playtested) content, including a new line of Star Wars units, and the C3G series which adds almost every super hero and villain you know of to the game. Originally only 10 Marvel characters were released for Heroscape, in addition to the official units from the Heroscape world Valhalla, and Dungeons & Dragons.

You can check out everything Heroscape at http://www.heroscapers.com/

When Heroscape was live, I was into other things, and only over the last few years have I started to collect some sets from thrift stores and Craigslist, if only for the terrain. I had got up to 4 massive, mismatched sets with many pieces missing (I only paid $5-$10 each set though) when I decided to drag it out, do an inventory, and of course build an epic battlefield using every last piece I had at the time. Check out my first epic battlefield here http://bradfinlayson.com/our-heroscape-battles-battlefields/ 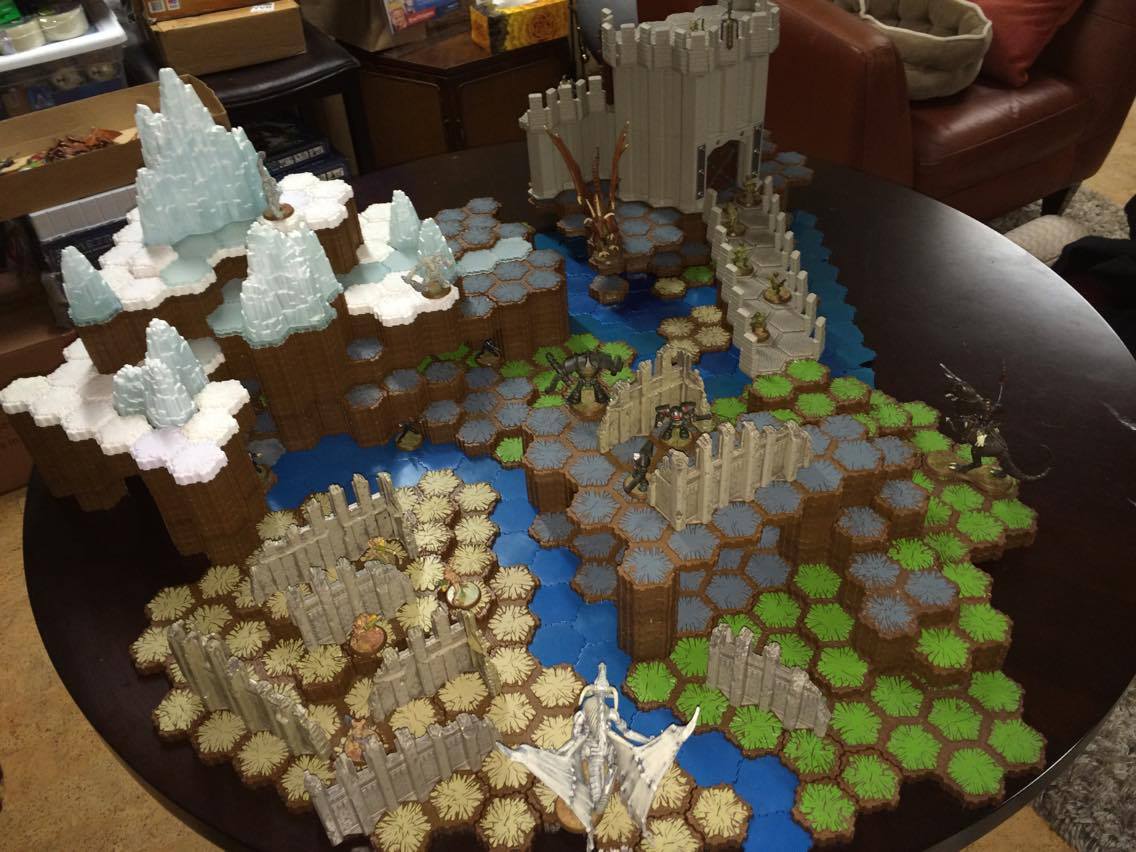 Castle, cave, desert ruins, and an ice mountain with giant underground caverns. What more could a tactical gamer ask for?

We’ve printed off some extra cards to fill out our options using minis from other games like Heroclix, Mage Knight, Myth, Mutant Chronicles, and more. We also added some of our groups favourite comic characters into the mix since I have quite a large Heroclix collection. Now we have quite a diverse selection including some top units as ranked by tournament players.

We’ve also started implementing a few house rules of our own, and from the Heroscapers website. We’re currently implementing rules like partial cover, alternating initiatives for teams, and ignoring the 1st level of height when moving/climbing up, so as too allow more freedom of movement over complex terrain.

Mutant Chronicles is an older, but awesome, tactical miniatures board game for 5 players. There are modular boards and 10 different missions that players cooperate to complete, but compete for the most promotion points. These promotion points act as experience points for your 2 Doomtroopers to go up and rank and ability. Each mission one of the 5 players is randomly chosen to control the Dark Legion forces. There are credits (used to check out equipment bunker between missions) up for grabs if the Doomtroopers can complete their missions and stay alive (you lose 1 credit each time one of your troopers dies), but if they don’t, the Dark Legion player gets credits that game instead.

The rules are simple and elegant, both turn by turn and in keeping track of progress using plastic pegs in a punched card for each players’ team. Most minis get 2 actions per turn which they can use to Move or Attack. You can also move twice or attack twice and each team is allotted a small number of extra actions they can use at any time during the mission. Some of the boss monsters have 3 actions every turn.

It’s amazing to compare this to Myth in how it essentially accomplishes the same thing: a co-op, tactical minis game where the bad guys are controlled by another force (either by a cumbersome A.I. in Myth, or another player in Mutant Chronicles), but as you can see from my write up of Myth below, it is very difficult to find a balance of challenge and game complexity/speed, and it’s pretty much unanimous that all our players like Mutant Chronicles much better.

Clever is a quick and fun card game is one we use to warm up. You make associations with letters, numbers, words, equations, categories of objects, and more, in order to ditch your hand, if you can’t play a card that fits, you have to scoop up all the cards. The player with the least amount of cards at the end of the game wins.

Betrayal at House on the Hill

Betrayal at House on the Hill is a popular, light strategy, co-op game is great fun (most of the time). The players start exploring a randomly generated haunted house by laying tiles as they go. Eventually one of the players triggers the haunt, and someone becomes the betrayer in one of fifty scenarios that include all your horror favourites and more!

Almost every game is fun, but every once in a while you get a real dud where because of the randomness of the game, the scenario just doesn’t work out. It could be players get trapped in the basement and can’t really do much, or due to circumstance the betrayer or explorers have no chance to win and it ends very quickly or without resistance. I currently am a little bummed on the game as the last time I played two games, both times I was kind of out of the game, without much to do, or any options to get back in. One of them I was the betrayer and the way it turned out I had no chance to stop the explorers who solved the scenario in a turn or two without much thought or effort. Still a good, fun game though. 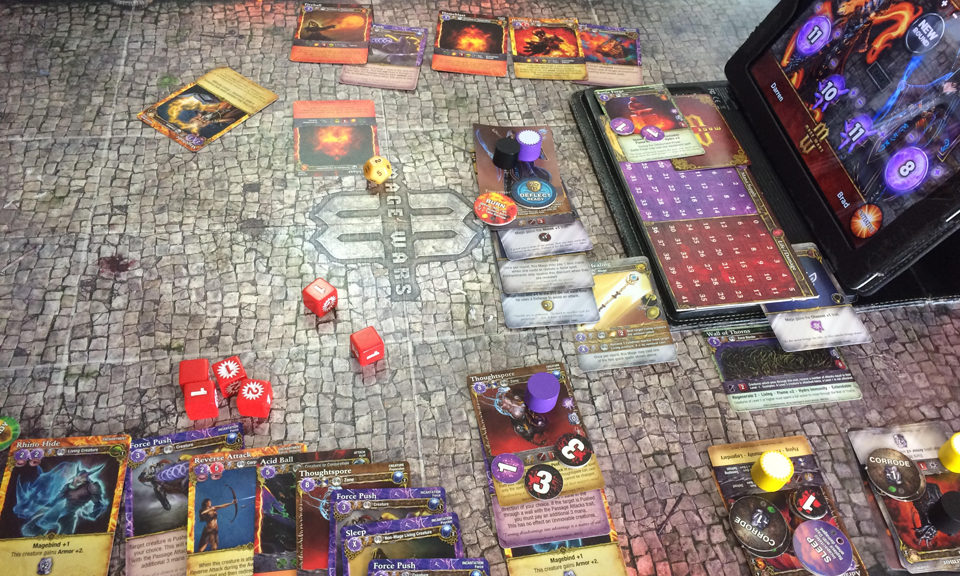 Love me some Mage Wars! Beautiful art and an innovative mix of smooth mechanics! The most immersive wizard-battling game there is!

I love Mage Wars. It’s the closest thing to real mage vs mage combat in an arena with all the abilities, spells and supporting beings you could think of. The rules are so good that I read them a month before playing the game and didn’t have to reread them before playing. I checked a few things as we went along just to make sure, but 9/10 times I had remembered correctly how it was supposed to go because the rules make sense and are presented in a way that I find very easy to follow.

Pandemic is another popular co-op game where a team of specialists try to save the world from four disease outbreaks. This game is pretty fun and challenging strategically. We’re starting to beat it quite often so we’re going to have to get some expansions soon, or try the Legacy version.

We played Myth for a while, but I think we might be done here. Unfortunately the rules are just so bad and cumbersome that all the great ideas of the game get lost. We found it very hard as a group to find a balance of challenge and game speed. Either the game was so easy that it was not fun, or the game was challenging but so complicated and slow that it was not fun either. Maybe we will return to it some day as it does have a lot of great ideas for co-op RPG adventure game.

We also play games of our own creation, playtesting upcoming Game Point releases like Wizard’s WARdrobe, and we still play Symetra as well.